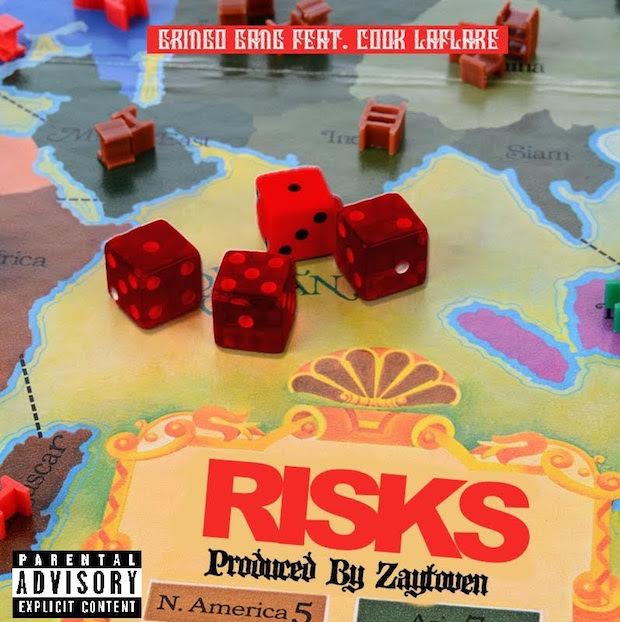 The track is taken from their upcoming EP The Language as the Gringo Gang consisting of (Spacedad, Shawn Ham, and J Mo) have united the Southside and the Westside’s of Naptown for a movement the whole city can get behind.
Recently the group interviewed with Radio One Columbus’ radio station WCKX 107.5, stating “We are not just another white rapper group, our music speaks for itself. You are witnessing the future unfold.”
“We started back in 2015, it started as a city wide movement with a clothing line we were pushing and then J-Mo and Shawn Ham started to come around more and we formed the group Gringo Gang. It’s crazy because the name came from a friend who was actually making fun of us. We took it and ran with it,” Spacedad said.
Gringo Gang Records formed in 2016 and has seen success with the regional singles “Slap Bacon” as well  “Prank Out”, which was covered by most mainstream outlets, blogs, and music services.
While Spacedad, Shawn Ham and J Mo make up the Gringo Gang, each have come from solo success. Shawn Ham’s visuals ft Lil Wyte have over 500k views on Youtube, Jmo has an active campaign online with the EP Lights which has generated over 3k spins on the popular platform Spotify and Spacedad had the popular hit “Slap Bacon” which currently has over 180k views on Youtube.
“We’re really excited to be able to partner with two companies that have assisted in the guidance of the careers of artists such as D12 and Bone Thugs and Harmony,” says Gringo Gang Records founder Jason Reed. “We can now take advantage of this powerful platform and look forward to growing our company reach.”This special co-branded partnership of Federation Records/Gringo Gang Records will provide a unique double-sided relationship, in which both subscribers and their friends will receive opportunities for monetary compensation for investment and support of the company. This is a groundbreaking effort in the music industry.

“We are the dopest fucking thing fans will experience in 2018!” Jmo said joking. “We really love what we do and put our all into the projects to give the fans the best experience possible. From the shows to the music and videos we aim to create high quality shit for the people to rock with!  We are a family and our fans are related and on the journey with us.  Oh…… and lastly a Gringo is an ‘American'”
To date Gringo Gang have been on tour supporting artists such as Migos, 21 Savage, Montana of 300, Young Dolph, Trippie Redd and more. The group Gringo Gang, has also been booked in New York at the Piano and SXSW at the popular “Beer and Tacos” Stage.
“Most of the concepts we try to develop around our everyday lives.  The words we say, the clothes we wear, the lifestyle.  We are really different in what we like throughout the group but we all have our own swag and ways of thinking.  So we try to mesh those together and give the fans a piece of who we are in these concepts.  Our newest project is called The Language because we want to indoctrinate people into our lingo first,” Shawn Ham said.
The first offering from the partnership is the single “Keep Me Going” available via all major outlets.